Had a quick escape up north to Hamilton Island to flee the cold winter in Melbourne. The weather was perfect for the first couple of days, so made the most of it getting up early for some sunrises and taking a helicopter trip out to Hardy Reef via Whitehaven beach; something that has been on my photo to-do list for a while now. The first night we headed up to One Tree Hill lookout for sunset which is a popular place this time of day! A pretty spectacular spot to watch the sunset; the smart people even built a cocktail bar there. Some other good spots were again up at One Tree Hill looking over Catseye Beach which proved perfect for watching the sunrise over towards the East. I shot a couple of nice panoramas up there with the sun rising behind the hills of Whitsunday Island. But by far the best part was the helicopter trip out to Hardy Reef. The flight departed from Hamilton Island and flew over the spectacular Whitehaven Beach which looked picture perfect this day. We then flew out over Hardy Reef which is home to the iconic “Heart Reef” that appears in most travel brochures for the Whitsundays. I managed to capture a couple of alright shots of this. It was a little tricky taking shots through the window which suffered from a bit of glare. A handful of shots did come out ok however which I was relieved about. Anyway, here a few of the shots from the 4 day trip. 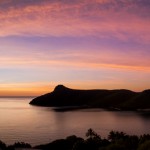