The 12 Apostles (or 6 now) are something that I have had on my ‘shoot list’ for a while now. I just hadn’t had the time or motivation to get down there! Well, this week I was playing tourist guide (a not very good one I might add) for a friend of mine and the Great Ocean Road and 12 Apostles are on most visitors’ lists when they come to Victoria. So, a road trip was called for. Funny how things work out sometimes! With some stop overs at Torquay, Bells Beach, Anglesea and Lorne, we eventually arrived down at the Apostles late afternoon and planned to hang around for sunset. Well the tourist guide came through… (well so I say anyway) as we experienced some amazing views as the sun fell and the golden light hit the cliff formations of the coast line. As the light continued to fade, there was an awesome orangey, purple glow on the horizon that the 5D picked up brilliantly. It was a pretty magical sight and something I won’t forget too quickly! We managed to capture some great shots too. Even more of a bonus was just as we were leaving, the penguins arrived. I attempted to capture a snap of them, but the light had well and truly gone by then. The dark blur in the last photo below are the penguins (you’ll have to trust me!). 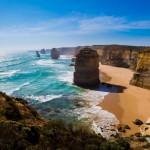 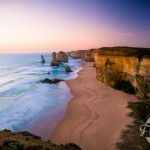