Part 3 of the Tropical North Queensland tour took me down to the Atherton Tablelands; the home of some pretty amazing waterfalls. The trip along the Gillies Hwy proved a test for my head which was spinning after the winding road trip through the mountains. Arrived by late arvo and dropped the bags off at the motel, then set off for the waterfall circuit track in the fading light. First stop on the circuit track was the Ellinjaa Falls. This was my favourite spot of the lot! Even with very little water from the lack of rain, the falls are still majestically stunning. Set the tripod up and slowed the shutter on the 5D to capture the silky flow of water. The results were amazing, with the silky white of the water against the dark rocks and spectacular greens of the moss growing on them. The tree stump in the foreground added to the story of the shots. Would love to see this spot when the water is truly flowing! Next stop for the day was the Milla Milla Falls which is probably the most photographed waterfall up there. This too was lite on the water and one of the locals who was having a swim said that it was rare to see it like this. None the less, it was still a pretty nice place to be. With the light almost gone, I retreated back to the motel. The next morning i was up at 4.30am and departed for the trip down to the Nandroya falls which required about a 50 minute trek on foot to the falls. The drive down there was quite amazing, I wish now i had stopped quickly to capture the sunrise coming over the hills as i was driving along the Palmerston Hwy. But I wanted to get to Nandroya before the sun overtook the falls. With “Hand in my pocket” by Alanis Morissette playing on the radio, I remember having an unbelievable sense of freedom and sense of life I guess as I was driving down there, as corny as that sounds, but a moment I will never forget. Its funny how songs can impact things so much. Anyway, made it to the car park and set off on the 2.5km trek to the falls. It was a race against the sun to get to the falls. On high snake alert, I was watching every step I took! Not a snake fan really and I knew they were watching. Ehhh. So made it down there unscathed and with the lower falls still just in shadow. Happy Days! This waterfall too would have been awesome when the water was really flowing, but it was lite as well. Still great to see though! On the way back along the trek, I stopped to capture the roots of the Buttress Fig which was so eye catching. It looks especially dramatic in black and white and love how the image turned out. 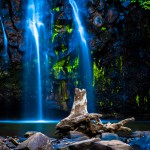 Fig Tree – On the way to Nandroyer